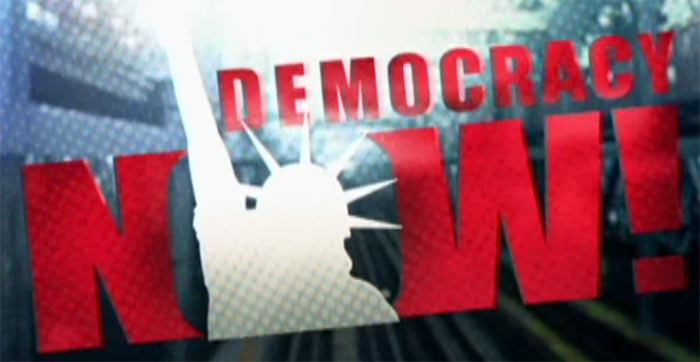 Democracy Now!’s War and Peace Report provides our audience with access to people and perspectives rarely heard in the U.S.corporate-sponsored media, including independent and international journalists, ordinary people from around the world who are directly affected by U.S. foreign policy, grassroots leaders and peace activists, artists, academics and independent analysts. In addition, Democracy Now! hosts real debates–debates between people who substantially disagree, such as between the White House or the Pentagon spokespeople on the one hand, and grassroots activists on the other.

New stations are adding Democracy Now! to their programming schedules all the time, and there are several movements going on around the country right now to bring Democracy Now! to new communities. To find out more about these efforts, and how to get involved, click here.

In addition, corporate media outlets in the U.S. are legally responsible to their shareholders to maximize profits.

Democracy Now! is funded entirely through contributions from listeners, viewers, and foundations. We do not accept advertisers, corporate underwriting, or government funding. This allows us to maintain our independence.

Democracy Now! is an independent daily TV & radio news program, hosted by award-winning journalists Amy Goodman and Juan González. We provide daily global news headlines, in-depth interviews and investigative reports without any advertisements or government funding. Our programming shines a spotlight on corporate and government abuses of power and lifts up the stories of ordinary people working to make change in extraordinary times. Democracy Now! is live weekdays at 8am ET and available 24/7 through our website and podcasts.